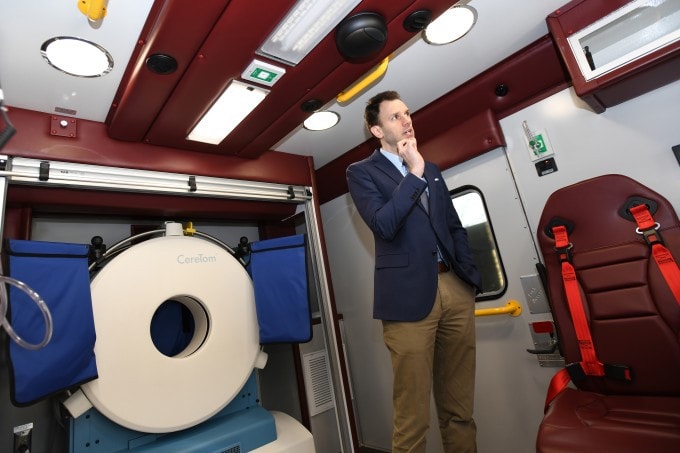 Indianapolis-based Indiana University Health, the largest network of physicians in the state, wants to limit the neurological damage associated with stroke by rushing a mobile computed tomography truck in addition to an ambulance on potential stroke victim calls.

“In stroke, time is so crucial,” says Jason Mackey, vascular neurologist and medical director of IU Health’s mobile stroke program. “We are looking for ways to reduce time to treatment.”

Strokes are caused by active bleeding or by a blood clot in the brain—knowing which is causing the medical emergency has a strong bearing on the outcome for the patient, and the course of treatment, because each varies widely.

“You don’t want to give a clot buster to a patient who doesn’t need it. That’s where scanning comes in handy in the field—you can scan [patients], and if they need treatment, you can give it,” Mackey says.

The sooner patients get the correct treatment, the likelihood of disability from the stroke is decreased. However, there is no current reimbursement for such a service, he says. IU Health’s Mobile Stroke Treatment Unit truck is made possible by a grant from the IU Health Foundation. Mackey says that when the mobile scanning unit is launched in a few weeks, it will be among roughly only a dozen or so like it in the country.

IU Health has spent the last three years laying out the plans, Mackey says. It’s faced a number of hurdles, because “it’s a new paradigm of delivering care.” It’s a multidisciplinary endeavor, involving emergency medical services, radiology and neurology, “bringing players to the table in a way that’s never done before,” he says. “We did it the right way and slowly built the agreement across multiple disciplines and institutions.”

According to Mackey, Methodist Hospital, where the ambulance takes its stroke victims, receives some 800 stroke cases a year. He cannot guess how many patients the CT truck will treat because initially the service will be available only during business hours and then on alternating weeks. “We’re going to start small,” he says. “Ultimately, we would like to expand and cover the entire county and portions of the city.”

Judi Ayres, director of stroke services at IU Health, says the Mobile Stroke Treatment Unit will carry a vascular neurologist, a critical care nurse, a paramedic, an EMT and a CT tech. It will take some time to work out logistics with the EMS unit. “Ordering the truck was the easy part,” she says.

Images from the CT scanner will be beamed via the strongest cellular network available and viewed in real time by a radiologist at the hospital and by the neurologist on the truck, Mackey says.

The project has involved “a sizeable upfront investment, on the order of $1 million,” and operation of the mobile unit is expected to cost $500,000 a year. “Because it’s such a resource-intensive program, it’s all the more reason to really study the outcomes,” Mackey says.

Currently there is little interest by the federal government or private payers in reimbursing for the mobile stroke care, but there is some hope for consideration in the future, Mackey says. However, in last February’s budget proposal, a provision in the federal budget expanded the Furthering Access to Stroke Telemedicine (FAST) Act, currently under consideration in Congress, to include mobile stroke units, he says.

Mackey says it will be at least a year until IU Health will assess the results of the project.